This article will be in two parts: my history of the search for an optimal grow light for a small 2’ x 2’ space, and the construction of such a light to achieve over a gram per Watt.

How it came to be

The first part of my journey was trying to understand why growers (in general) were using two separate lamps, metal halide (MH) for vegetation and high pressure sodium (HPS) for flowering, while there was only a single outdoor light source: the sun, for the entire life cycle. Blue for veg and red for flower is an oversimplification that underscores common misperceptions of plant physiology but it is still a good concept to understand. In the HID world HPS is the champ in converting electricity to light (110-150 lumens per Watt (LPW)), why use the less efficient (90 to 105 lumens per Watt) MH? There is insufficient blue in HPS bulbs (though this is improving) to prevent extreme stretch in the early stages of growth, thus the much higher blue content of MH was chosen. Plants grow towards blue light. This is called phototropism. When there is not enough light in the blue spectrum, plants will keep searching or stretching trying to find it. So why not continue all the way through the entire growth cycle with MH? Red chlorophyll A & B receptors have a higher response than the blue chlorophyll A & B receptors; therefore let’s give the plants the spectrum they respond best to. As upward growth slows or stops in early to mid-flowering, blue light is not as critical to marijuana growth at that point in time. But here is the kicker, HPS puts out the majority of its energy in the yellow spectrum; read: the ‘wrong’ theoretical spectrum, so how come indoor growers get such great results? The simple answer is that plants use almost the entire visible light spectrum, though at different efficiencies, and can adapt to imperfect or out of balance light conditions. Through a series of highly complex chemical processes at the molecular level, cannabis can up or down-regulate the light received into a more useful form. Enter bi-color LEDs that just focus on the red and blue chlorophyll A receptors. This was based off of work done at NASA using very early and inefficient emitters. Most commercial lamps mimicked this research and copied the 6 (or 8) to 1 red to blue ratio. I believe this to be less than optimal as can easily be observed by looking at the photosynthetic response curve. The red response is not multiples greater than the blue response. 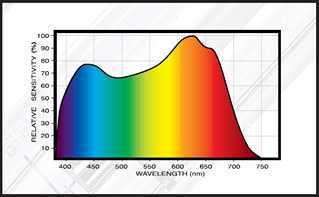 What NASA did prove is that plants can be grown from seed to fruition on merely two narrow spectral bands. This is good information, but does it point to optimal growth? My first foray into commercial LEDs was the purchase of three (one red, one blue and one mixed) 45 Watt Chinese LED panels using 0.5 Watt emitters. These actually worked OK, but for a few caveats. My next experiment was to use higher power red and blue (3, 5 and 10 Watt) emitters on a single chip. These were much less likely to cause spotting, but color mixing was still an issue. Also a major consideration is that while lumens per Watt is not the metric we need to best evaluate a horticultural lamp it was what was available on spec sheets.

Where LEDs were most lacking was in efficiency and color mixing. Color mixing is giving each chloroplast an equal amount of the spectrums emitted. My red and blue LEDs were averaging about 30 lumens per Watt vs. 3 to 5 times that much for HID lamps. Even though optimally targeting the prime receptors, the lower luminous efficacy could not compare to HID. During my research, commercial manufacturers were experimenting with, and offering, 2, 3, 5, 8 and 10 spectral band LEDs in an attempt to hit all of the various photoreceptors and not just chlorophyll A & B a couple offered true full spectrum with no gaps in the spectrum offered. There seemed to be no general consensus on what was best. People were groping in the dark (no pun intended). Were the ancillary pigments stimulated by orange, green, yellow, cyan and deep red; etc. necessary? I looked to the sun and the plant photosynthetic response curve as templates for the best possible grow lamp. Getting the curve right AND getting a much higher efficacy are both necessary if we are trying to match and/or outperform HID lamps. I believe this became possible with the introduction of the CREE XLamp CXA25xx and CXA3050 series, check out the Cree website, it is pretty interesting. Bridgelux, Seoul Semiconductor and others have somewhat similar products. These are COB (chip-on-board) high power white, full spectrum emitters designed for industrial and residential lighting. They have a very high CRI (color rendering index) which means they show all colors equally well to the human eye.

Note that the peaks happen to coincidentally correspond to the main plant response peaks. 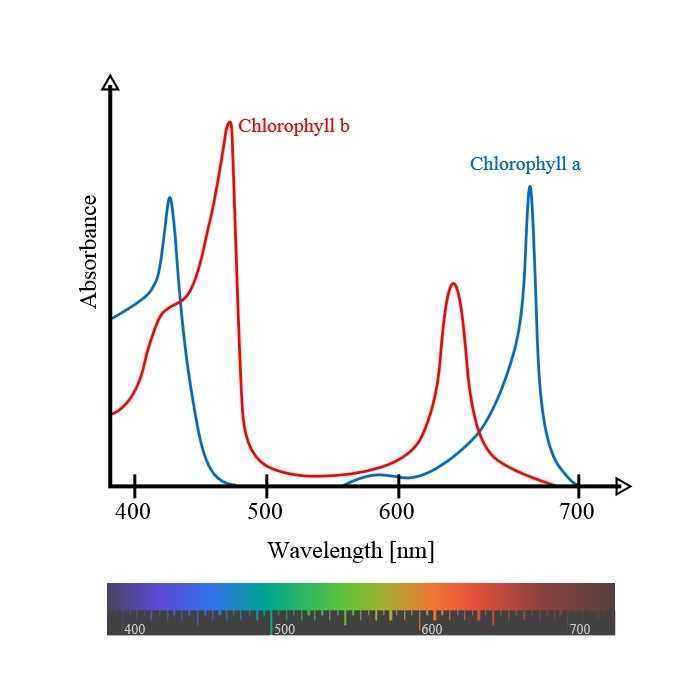 These CREE emitters are putting out 105 to 118 LPW, depending on spectrum chosen, at a 120 degree viewing angle. This puts them on equal footing with MH as far as efficacy and surpasses MH in regards to color spectrum and longevity, but still trails as far as cost. My grow area is very restricted as to space and ventilation so I calculated the maximum amount of heat dissipation I could have in my space at about 165 Watts, thus I chose to use 5 emitters running at about 28 Watts each. I went with four 2700K (warm or more red shifted) and one 5000K (more blue/green or cool) emitter(s) with the 5000K in the center, and the 2700s on the four corners. 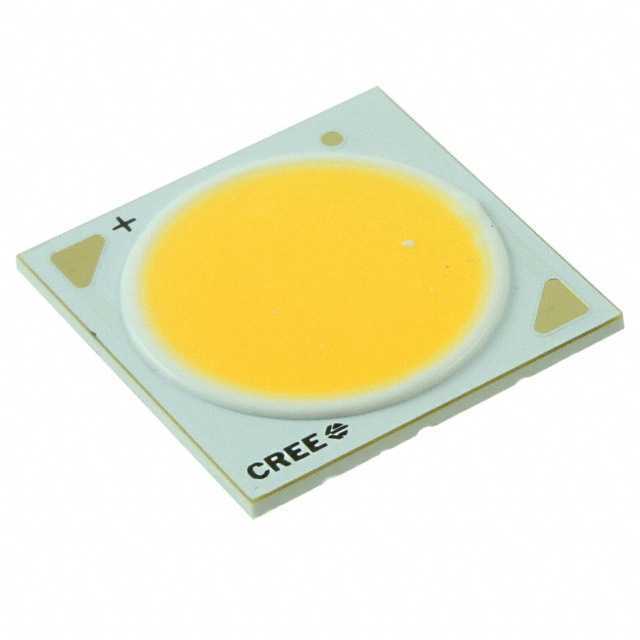 I decided to go with passive cooling to keep it simpler and to not add the extra few Watts required for the fans. Using fans (active cooling) could greatly reduce the size of the heat sinks and probably the cost as well. 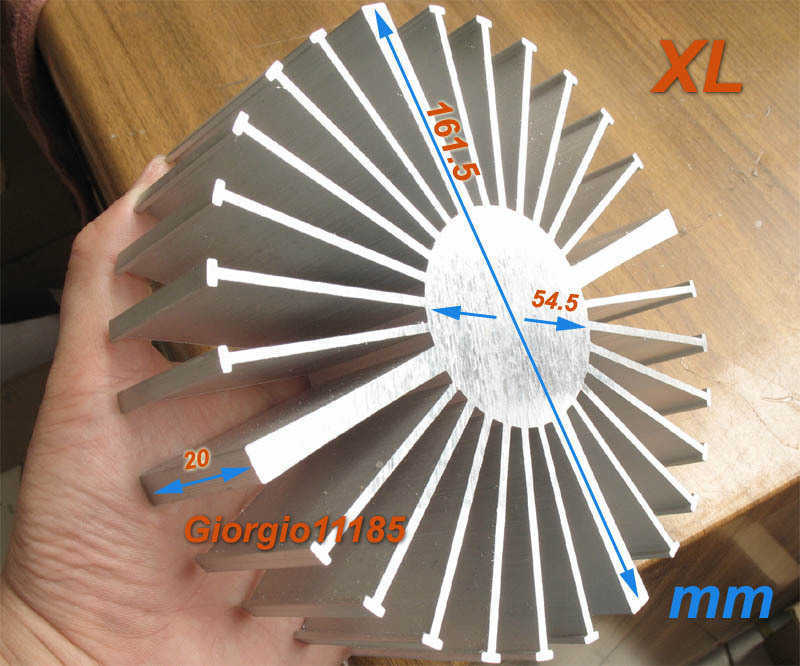 I attached the emitters to the heat sinks with permanent thermal adhesive (Arctic Silver Alumina AATA-5G Two Part Thermal Adhesive Compound Epoxy).They are now non-removable without destroying them. Since my build, Molex has released a LED holder specifically for the CREE CXA 25xx series. These would screw into the heat sink, requiring tapped holes. Power leads can then be pinch-gripped instead of soldering as I did. If you want to change the emitters to a higher Wattage or different Kelvin rating or replace in the case of failure, it is a simple matter of loosening two screws and removing the leads with a pin. I also chose the more expensive route of using 5 separate constant current LED drivers. Constant current means that as components age or heat and cool and input voltage varies slightly, the LEDs receive the same amount of current. This keeps the brightness constant as well and prevents premature aging or possible failure from current spikes as LED emitters are extremely sensitive to current fluctuations. I have noticed that only some of the better commercial LED grow lights use this kind of technology. In this case, I went with the 30 Watt/700mA model # RACD30-700 units from RECOM. These feature overload, short circuit and over-voltage protection. Efficiency is good, but not great, at 85%. I also considered Meanwell as an established manufacturer which offers some more efficient drivers at about 92% efficiency, but at a higher cost. I had some extra room on the frame so I added two E27 (common screw-in household sockets) ports in case I wanted to add UV, far-red (incandescent) or CFLs. Due to the limited space, I use the newer and shorter micro-mini CFLs. 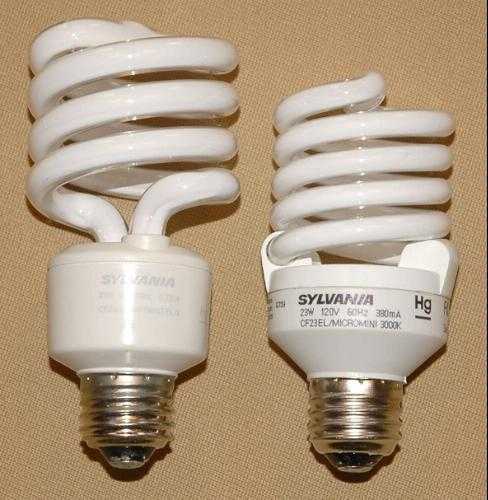 Note the older, larger style mini on the left and the same Wattage micro-mini on the right.

For the frame design, I wandered the isles of Lowes hardware store. Any large chain hardware store should have most everything you need. As this was just for my personal usage and to keep cost and complexity down, I wired the power directly to the terminal block and did not use a power switch. With a bit extra work, one could put each driver on a separate power switch for ultimate control. Either way, you be sure to ground the frame to prevent electric shock. The heat-sinks were then pinch gripped between the U-rails using the long screws and oversized washers. 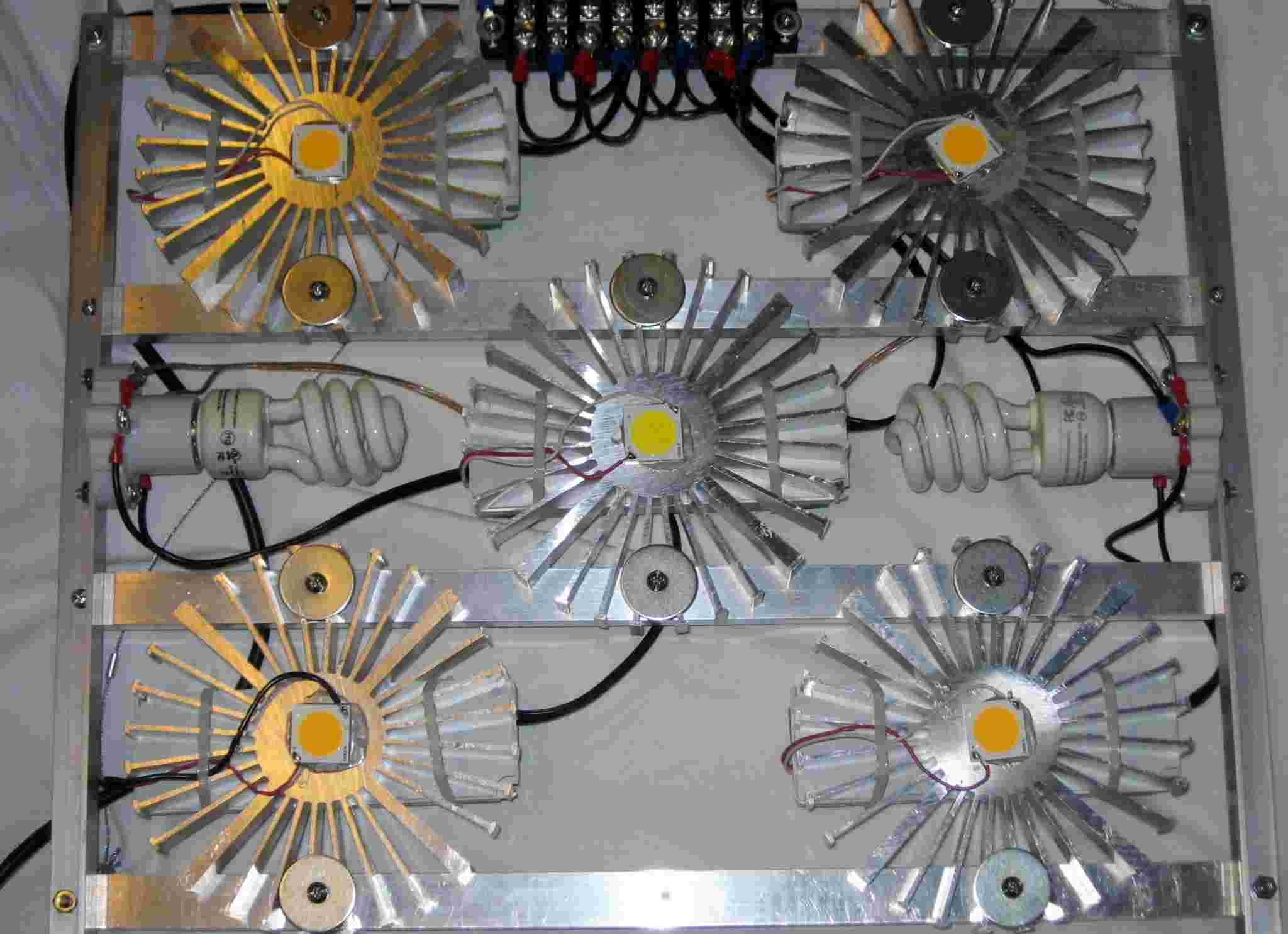 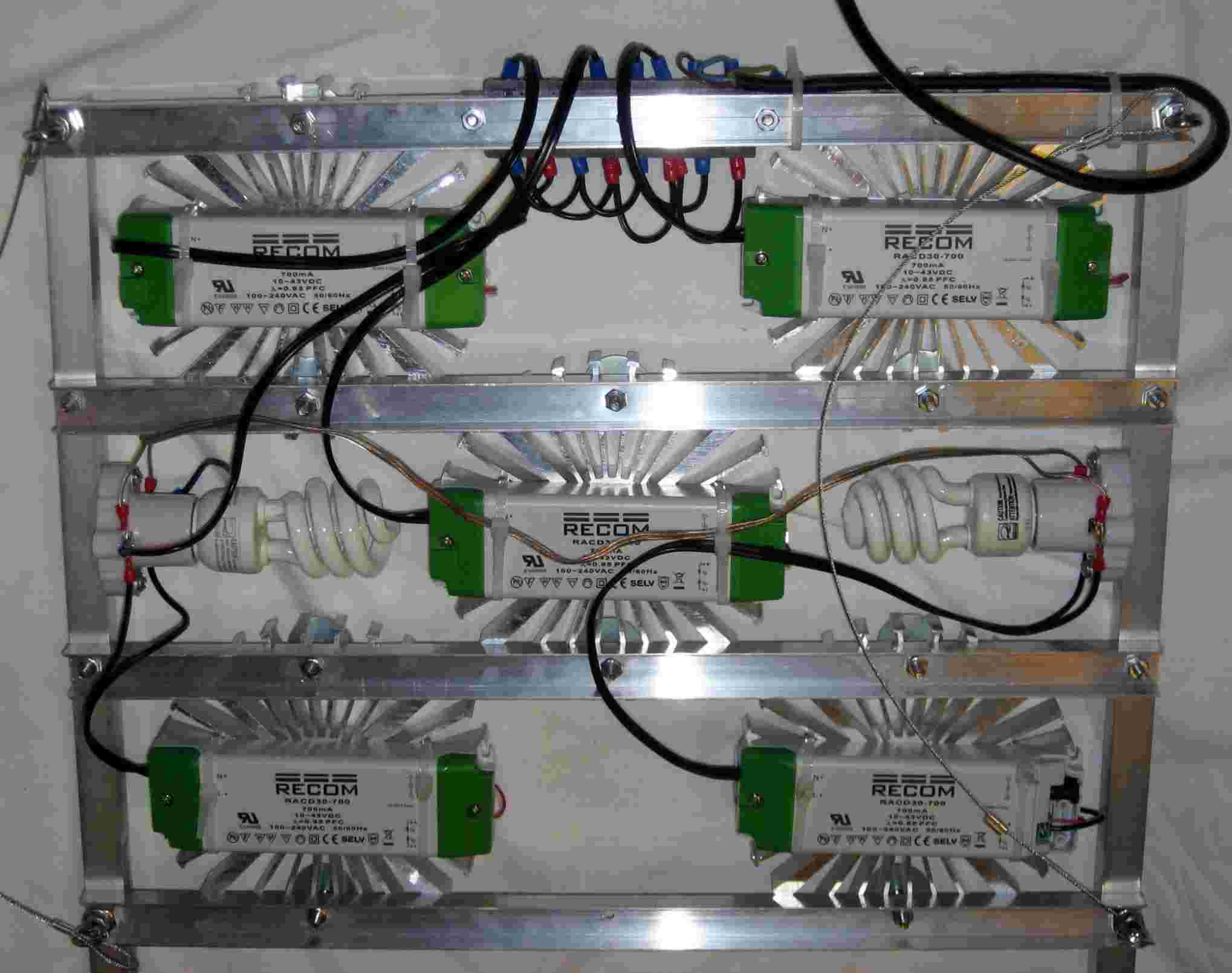 So theory is great, but how does it work?

Having five light sources spaced 5 - 6” apart gives much better lighting than a single source with minimal shadows, even down low on the plants. The color is very natural – no harsh blue or murky yellow. The plants absolutely love it. I have had less stretch than with any other lamp and lush, full growth all the way through to flower. This lamp provides the perfect amount of light for my 2’ X 2’ space and getting over a gram per Watt is easily doable for the experienced marijuana grower. 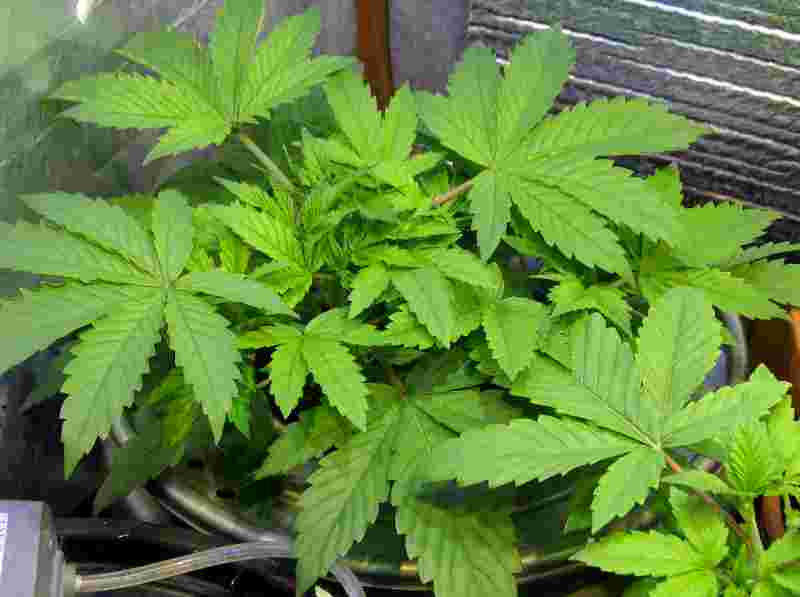 Note that this is the unadjusted natural color put out by the lamp without color correction.

I have spent untold amounts of money and hours of research to come to this design and I am very happy with it. I am convinced this is the way to go for personal use for those with minimal space and heat restrictions and a penchant for mechanical and electrical tinkering. As to commercial applications, the price/performance ratio is not quite there yet. CREE and other cutting-edge semiconductor manufacturers have already accomplished much higher LPW figures in the laboratory and eventually these will make it to full production. I would estimate there are 3 more generations before they reach their maximum potential and easily surpass the mighty HPS. In the meantime they will focus even more on ramping up production and bringing costs down. Many people ask me the price. Where do I start? From engineering school where I learned to read and evaluate specifications? My years of cultivation experience? Do I count the thousands of hours of research and the costly failed experiments and the many redesigns on drafting paper until I got it almost right? Then there is the cost of the tools and labor and so forth, but in the end – this lamp is a part of me and this reconstruction is a gift to you guys for your support at HowtoGrowMarijuana.com. Parts costs can be tallied from the links and your local supplier on the accompanying list. Figure on around $500. If there is enough interest, I will help others build a similar lamp adapted to their particular situation either as a consultant or as part of a future column started here. If you feel this build is beyond your current capability, or just can’t be bothered, fair enough, you might want to check out some fine, full spectrum manufactured LED grow lights that come with a 5 year warranty from the guys at .