Cannabis sativa and cannabis indica are diurnal plants meaning that they use day/night light cycles to trigger key growth responses. When growing weed indoors, it is vital to understand that there are two distinct phases to the marijuana light cycle: vegging or vegetating and floweringPlease also read – Marijuana Grow Lights Comparison.

During the marijuana vegging cycle, growing indoors will focus on establishing a solid root system, a strong main stem and lots of foliage consisting mostly of sun leaves. These are the broad five-fingered leaves (sometimes 7 or 9) that are the main engines for growth - converting light, with the addition of carbon dioxide, into sugar which is the plant’s food.To power this chemical reaction requires plenty of light and in the right frequencies. As you can see by the graph below, marijuana has two chlorophyll A and two chlorophyll B receptors; with two absorption peaks each in both the blue (400-500nm) and red (620-720nm) spectrums. Good full spectrum LED grow lights will cover this entire spectrum. 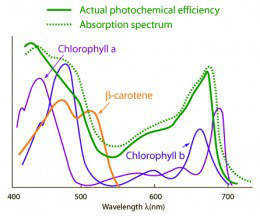 In addition to photosynthesis, blue light is also critical for phototropism. This is the chemical process that tells the plant where the light source is and keeps your plants pointing towards the sun when outdoors. Even if your grow lights are stationary, your plants still need sufficient blue light for proper growth and orientation. Without it your plants will grow tall and weak ‘searching’ for a light source. All of this is great to know, but what does it have to do with you and your selection of lights? High pressure sodium (HPS) lights do not have enough blue light for proper phototropism. Roughly 3-4% of their energy is in this range where a minimum of about 12% is required. This is the reason most large-scale growers choose blue-rich metal halide grow lights during the vegging cycle or full spectrum LED grow lights all the way through the grow cycle.Your lights should be on a timer so as to start and end the day/night cycle at the same time and to keep the day length uniform. To stay in the vegging phase requires a minimum of about 14 hours of continuous light to emulate the longer days of late spring and summer. Longer cycles will not harm your plants as they have no need of ‘sleep’; thus many growers opt for a 24 hour light cycle. Others believe that marijuana need some ‘down time’ to catch up on other physiological processes and will run their lamps 18/6 or 18 hours on and 6 hours off. This also saves some electricity and allows night temperatures to drop, but will marginally slow growth. 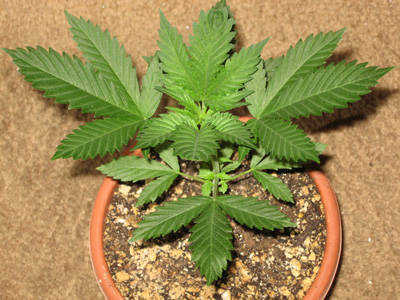 Seedlings do not require very much light and can easily be damaged or burned by excessive light or heat. As the plants ‘harden off’ or get used to their new environment, more light can be added.  Insufficient luminous flux will cause your plants to stretch in an attempt to reach the light. This will result in tall, weak plants with long internodes. Strong light with insufficient blue light will give the same symptoms. Fluorescents including CFLs, metal halide and single band LEDS with at least 1/8th of the emitters in the blue range will all perform satisfactorily.How long to veg your marijuana is entirely up to you. It depends on the strain, the size of your grow room and your goals, and could range from 0 days to many months; the average being in the 4-6 week range. Instead of a specific time frame, some farmers will veg until a certain height is reached, often 12 to 18”, with the knowledge that the plants will continue to double or even triple in size once flowering has begun.

The trigger for cannabis to switch to flowering is strictly in the photoperiod. The color or spectra of your lights or amount of radiance has no effect on this transition whatsoever. Shortening your light cycle to 12/12 light will begin the budding phase. It may take 2-3 weeks after switching for marijuana plants to show their sex. When they do you may separate the males from the females to prevent pollination. During this time your plants will continue to grow, often stretching 2-3 times their pre-flower height.As your plant will be larger than ever, they require a great deal more light. To provide it, many growers will switch to HPS at this time or continue to use full spectrum LED grow lights because these lamps have the greatest efficiency and provide the most photonic energy for growth and budding. At this stage, phototropism is not nearly as important, thus your plants can get by with the diminished amount of blue. It is not that the spectrum needs to change; it has to do with the fact that cannabis needs a tremendous amount of light to flower properly and HPS are good but offer a fair bit of heat production, LED’s that offer red light offer the most lumens (and least total heat output) per Watt so are a great bet. 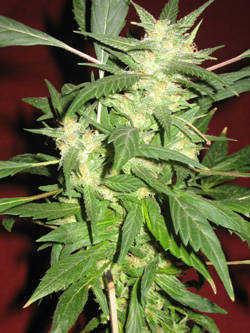 While marijuana can actually veg just fine on pure blue light, a healthy dose of red with a small amount of blue is necessary for flowering.

Can you give your marijuana too much light?

The theoretical answer is yes, but in actual practice it is quite rare for this to occur when lamps are placed at the recommended distance over your plants. Light saturation or bleaching is evidenced by large white spots on the leaves. Narrow beam angle LEDs (ones without proper TIR lenses) can easily cause this.Much more likely is heat damage. Ambient room temperature may be within range, but the temperature at the plant level is more important. If you do not have a thermometer, place your hand at the top of the canopy. If it is remotely uncomfortable then your plants will be as well.

So how much light then do you need to grow marijuana indoors?

As much as you can afford to whilst still keeping your room cool and with safety in mind, is the non-scientific answer. More empirically, shoot for a minimum of 2,000 lumens per square foot up to 8,000 lumens maximum.

Short answer: not if you start with full spectrum grow lights, but yes if you start with metal halide.  Full spectrum lamps such as ceramic or pulse-start metal halides, bi-spectrum induction, most fluorescents and multiband (broad or full spectrum) LEDs may all be used for both phases of growing marijuana indoors.Remember that we do not switch suns in the late summer! Despite myths to the contrary, the solar spectrum does not shift towards the red wavelengths in the fall. Daily spectra shift is far red in the pre-dawn, deep red at sunrise moving towards orange, yellow and finally blue-white at noon, and then completing the cycle in the inverse pattern. Yet growers are not currently attempting to mimic the extreme daily color shifts created by atmospheric filtering and still grow large healthy plants.

Also known as ‘The Mars Effect’, this is an area for experimentation by advanced growers of marijuana indoors. It has been noted that the addition of far red light (700-720nm) may double the rate of photosynthesis when used in conjunction with deep red light (650nm—670nm). This effect only lasts for an hour or two. Far red LEDs or incandescent bulbs are the main sources of 720nm light. Understanding this information should not concern the casual grower but it is good to know though.

There is yet another long-standing debate as to whether or not the addition of UV-A or UV-B increases the potency of indoor grows. This theory came about because of the generally higher THC content of equatorial sativas. Many have wondered if trichome resins laden with THC may act to protect marijuana from UV damage. Despite several white papers published by reputable horticulturists, the answer remains murky. We believe this is so because most tests use low to moderate amounts of UV for a 12 hour period; whereas a shorter 1-3 hour burst of strong UV may be necessary to induce any effect.

A timer is an important piece of equipment for your garden. While not strictly necessary as you could perform all functions manually, it keeps your light cycles uniform and accurate. Prices can range from around $10 to $300 depending on features, programmability, number of outlets and power handling capability. The more expensive units can have different timer settings for different purposes such as lighting, ventilation, hydroponic water pumps, etc.Timers come in two basic flavors: digital and electro-mechanical. Mechanical timers have a powered wheel that slowly spins with pegs to set the on/off times. Electronic timers have digital clocks built in, no moving parts, are easier to program and only slightly more expensive. 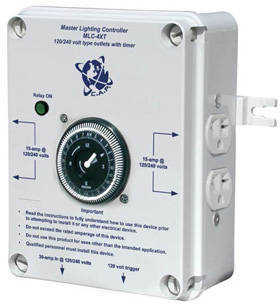 When deciding on a timer, you must consider your input voltage (110V/220V), the total amperage of your setup with at least a 10-20% safety margin including possible future equipment additions, and how many pumps, fans, lights, etc. you are going to be controlling.

Don’t be confused by all the jargon and technical information. Growing marijuana indoors is actually quite simple. To understand the basic marijuana light cycle, all you need to remember is 24 hours of light for vegging and 12/12 for flowering. Give your marijuana enough light in the correct spectra and you will both be happy!
© 2020 How to Grow Marijuana | Grow Weed Indoors